I tried to photograph a plane from the lounge, shame it was so dark outside.

Why Airport Lounges Are After Security

Updated by Chris. Chris enjoys relaxing in the lounge before flying (who doesn't!).

During a recent visit to an airport lounge, I stopped to reflect on why airport lounges are located after security rather than before. I used to work as a consultant for airports, helping them with layout design and passenger flow. Using my typical consulting process, I did some research and put together the reasons why airports locate lounges after security.

Personally I’ve found it also reduces stress, I prefer waiting for my flight after passing through security. That way, I know a hold-up in security screening won’t affect me.

I’ve illustrated how this affects passengers below, hopefully knowing this will serve some comfort as we stand in line waiting to pass security and relax in the lounge.

At some airports, flying first class means you can avoid the security process and go straight to the lounge! It's a shame we can't all fly like this.

A sudden rush of people slow down security

If the lounge were located before security, the screeners may become overwhelmed by everyone rushing in once the plan is called to board. 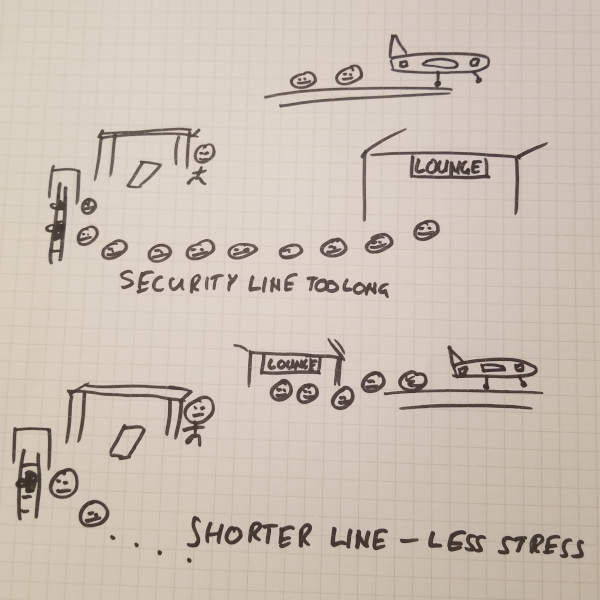 People usually arrive at security spread out over some time before the flight departs. If everyone was waiting in the lounge, they would all join the line for security together. This sudden influx of people would take a long time to process through security. In my experience, most airports aren’t designed to handle a sudden influx like this.

Less chance of missing the flight

If the lounge is located after security, it is easier for a tardy passenger to catch up and make it to the gate quickly. 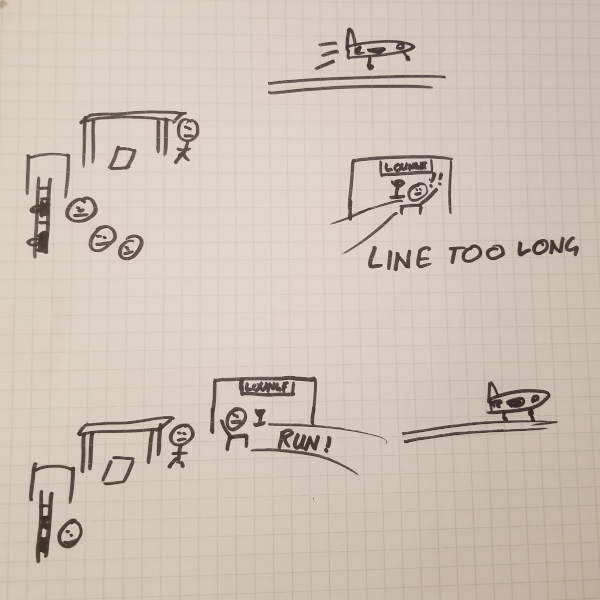 I’ve seen many passengers before miss their boarding calls. Many lounges I’ve been to don’t even make boarding calls. Passengers who lose track of time run the risk of missing their flight.

At the last minute, passengers can make a dash for the plane. I’ve even seen airline staff come around and ask in the lounge for a passenger who was about to miss their flight.

Running for the flight or finding a lost passenger in the lounge is hard if the passenger still has to pass through security. There may be other people in line at security, or security may wish to apply additional screening. The passenger runs an even greater risk of missing the flight. 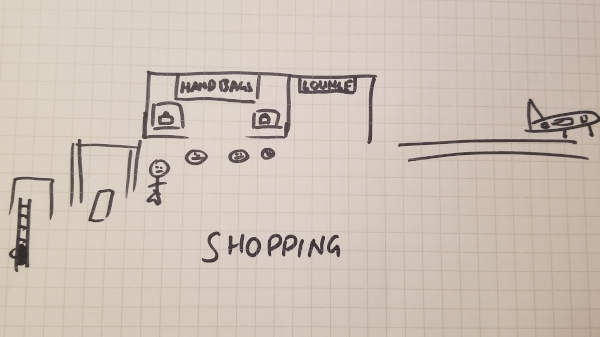 Airports love giving passengers more shopping time. I haven’t worked with an airport yet that didn’t value retail space. Hong Kong airport, for example, makes more money from retail than it does charging airlines to use the airport!

An airport can entice people through security with a nice lounge waiting for them on the other side. These people wander through shops before reaching the lounge (I’ve seen many airports make this a winding path) giving them a chance to spend more money at the airport.

Why some airports have lounges before security

Airports that include a lounge before security screening may do so:

While technically it’s after security for the arriving passenger, some airports have a lounge on the ‘check-in’ side of the airport.

Arrival lounges provide passengers with somewhere to change clothes, get a drink, and generally freshen up before leaving the airport. If I’ve just hopped off a long flight and heading straight in to a business meeting in the city, I love to shower and change at an arrival lounge first. It’s a shame not more airports have them.

Some airports I’ve visited have many parts to their terminals, some of which don’t have dedicated lounges after security, usually due to lack of space. These airports can provide passengers with a lounge prior to the security screening instead.

At some airports, airlines are able to give out fast-track passes to passengers to get them through security faster. These passes are typically given to business class passengers and high-tier members of the airline’s frequent flyer program.

When I was an airport consultant, it wasn’t often that we got to work on a new airport design. Even then, few airports ever saw the incentive to put a lounge before security. Frankly I agree with them. There are no real benefits to put a lounge before security. It also gives passengers a better experience if the lounge is after security, immigration, and the stress that can come with both.